2018 Update: This remodel has been completed for some time. Please see current photos in our gallery.

As we’ve had many guests curious about our remodel, I thought I’d pass along an update. We spent a week in Atenas during the middle of August updating a number of things around the house and meeting with the builder and his crew. They are doing a fabulous job and we are so excited to see the finished product.

First and foremost, the outdoor patio has been drastically expanded. While we were in Atenas, the crew finished up doing the metal and ground work for the patio and poured the concrete a day before we left. We had a chance to snap a few photos before we headed back to the states. As you can see in the photos, the patio has been drastically expanded with plenty of room for loungers, an outdoor table, chairs and more. The outdoor shower is framed up and both the patio and shower are awaiting the Coralina (coral stone) to arrive from the Dominican Republic very soon. 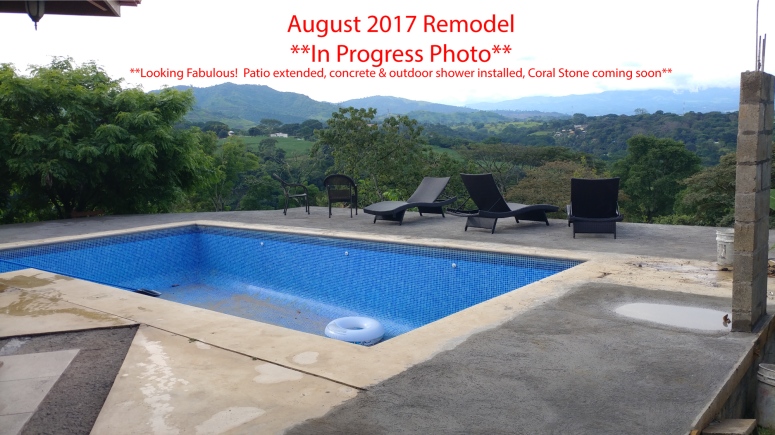 We were going back and forth on installing an outdoor awning to give some protection from the sun. Instead of the folding awning, we decided on extending the actual roof off the living room to cover the outdoor dining table area. This will give us a much more durable structure outdoors.

The grout on the pool received a refresher and we’re installing a stainless steel rail on the pool steps. The outside of the house received a fresh coat of varnish, gutters and drain pipes have been updated, fascia has been painted and a host of other little items completed. 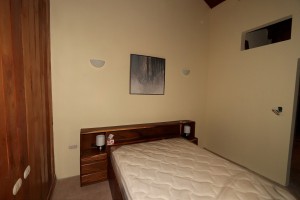 The interior changes are nearing completion. The 3rd and 4th bedroom have been permanently split. Glass block walls have been installed on two of the bathrooms. New paint in the kitchen and bedrooms. New shelving has been added. New small appliances throughout the kitchen. Added a dishwasher and garbage disposal to the kitchen sink. A new trundle bed has arrived for the 2nd bedroom and a brand new queen bedroom set came in for the 4th bedroom. Both sets custom made in by the artisans in Sarchi, Costa Rica. Canet easy roll down blinds, the same as we have in bedroom number 1 and 2, have been installed in bedroom #4. Again, lots of other small items have been tended to inside the house.

After the remodel, we will have about 3,600 square feet (335 square meters) of living space including the patio area. So much more room to enjoy this beautiful country.

The remodel is scheduled to be finished the middle of September with a few small items tied up at the end of September. Look for completed photos in October!